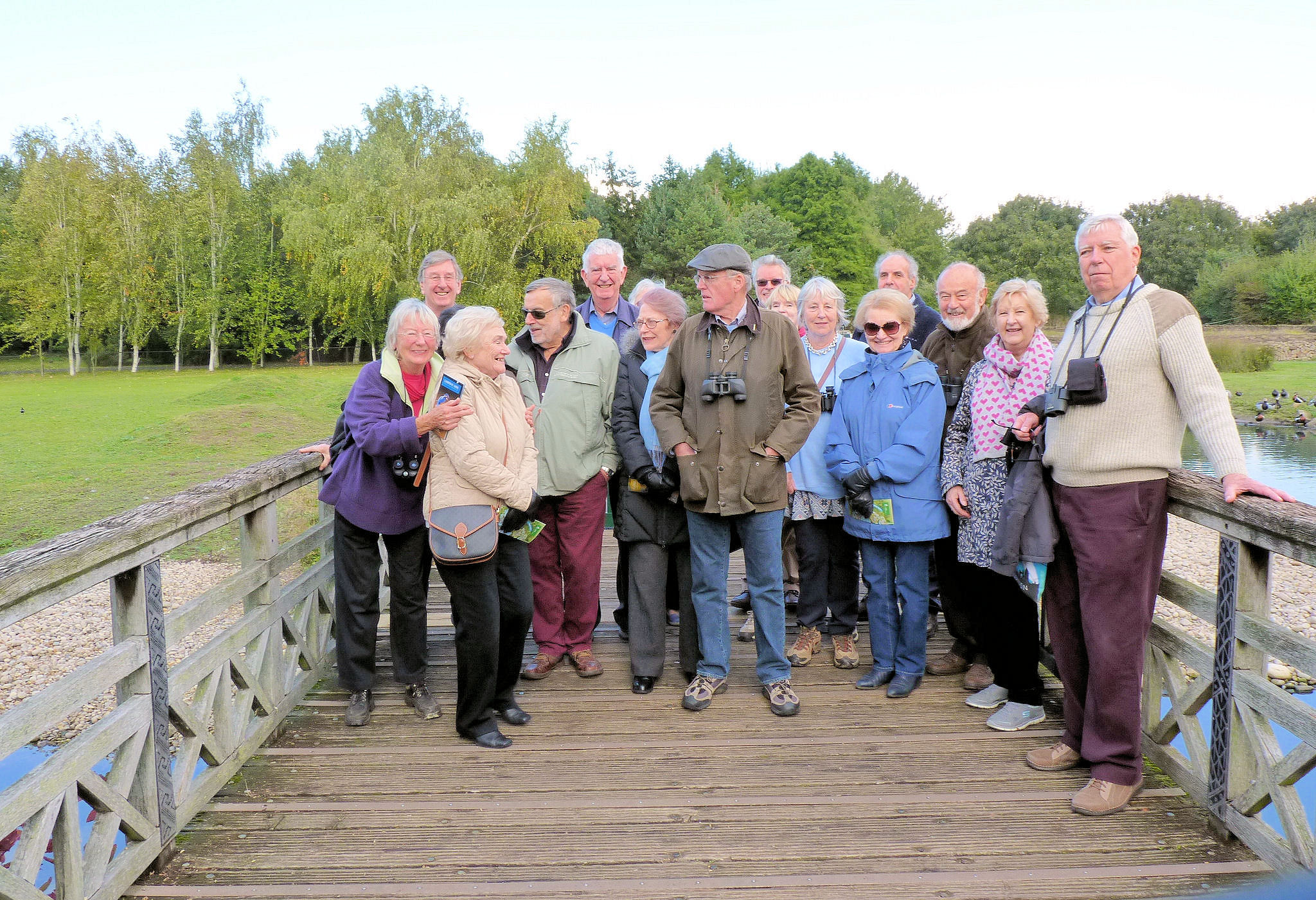 Having followed the amazing directions provided by Peter, via Gwyndaf, a select party of eighteen souls duly arrived at the Wetland Centre in Barnes late morning on Thursday 13th October. We were met and greeted by the WWT Chairman himself, otherwise known to us all as Peter Day. Having downed a very welcome hot coffee, we then embarked on our tour, under the watchful guidance of Peter.

We were led through a series of avian habitats from around the world, which have been expertly created by the efforts of the Trust. It is astonishing what the workforce has achieved in less than twenty years by remodelling the redundant Barnes reservoirs and diligently planting an abundant amount of trees and shrubs. 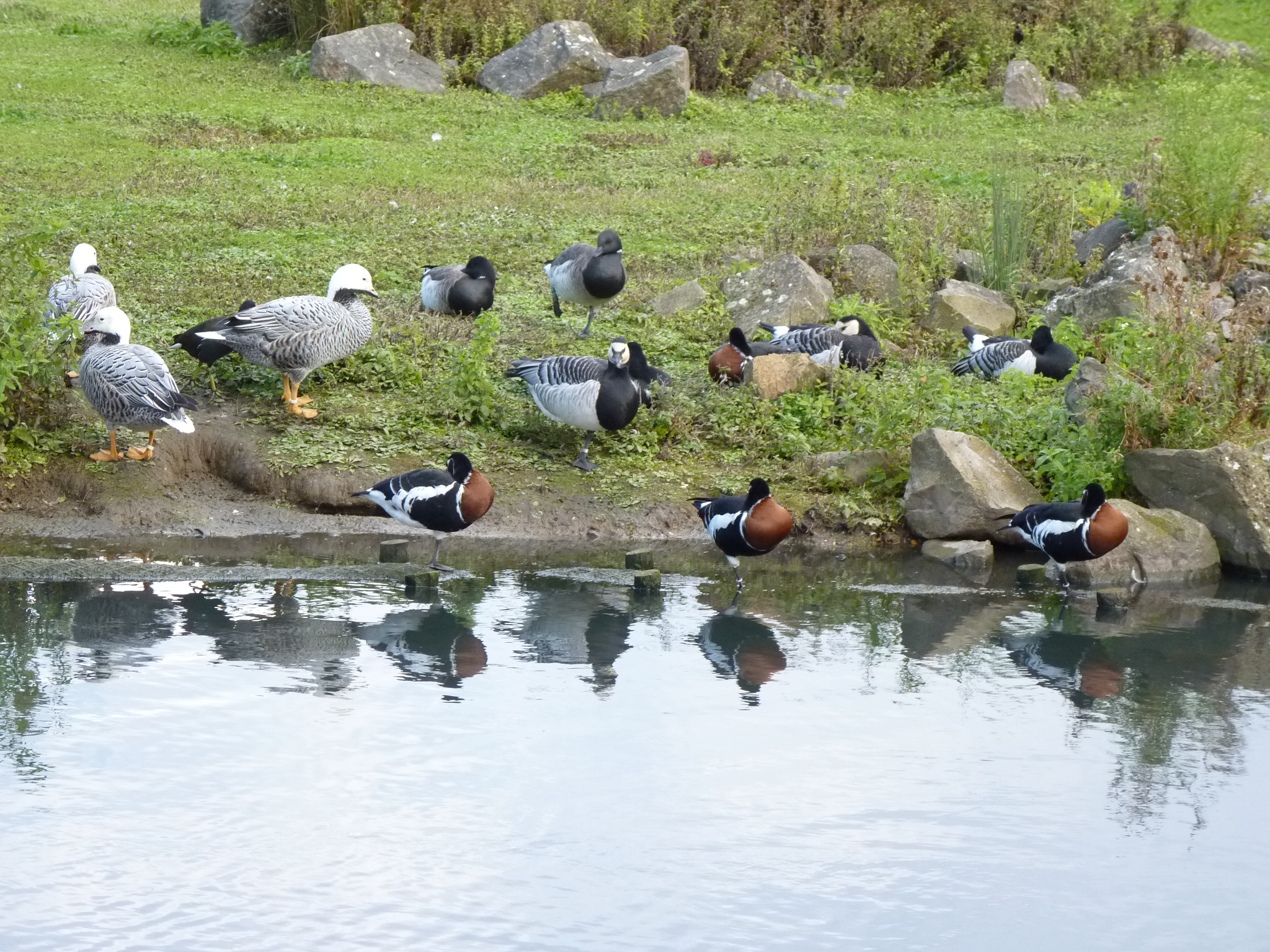 Peter walked us round, demonstrating a very impressive grasp of the subjects and imparting his extensive knowledge. He managed to answer virtually all our questions, no matter how obscure or trivial they may have seemed.

We were blessed with a dry and mostly sunny day, if a little chilly. There was
always plenty to see, with new surprises round every corner. Some of the birds there we would not have expected to see, like the Egyptian geese. However, as Peter pointed out, these had originally been imported from the Middle East by some unknown person and the young had escaped from their collection enabling them to fly to places like the Wetland Centre as and when they wished. 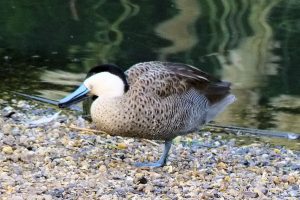 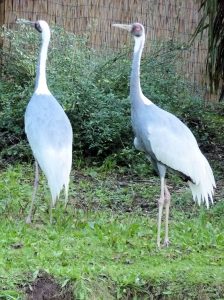 There is a constant threat from foxes and this has been largely controlled by surrounding the site with electric fences, extending up to three feet below ground, preventing burrowing. Incredibly they do not have a problem with squirrels or Canada Geese. The Wildfowl and Wetlands Trust, originally set up at Slimbridge by Peter Scott in 1946, is doing very valuable work in the
conservation of wetlands, their plants and waterfowl around the world. It is also providing an educational experience for many thousands of disadvantaged and other school children every year, some of whom we
saw, and they appeared to be having a very good time. 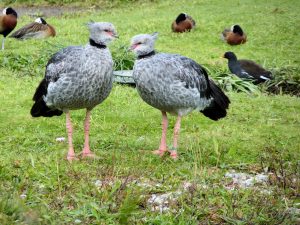 After lunch, in the excellent café, a number of us enjoyed seeing the Asian
otters being fed. Others enjoyed further strolls, taking in some of the hides
where the wild birds can be observed in peace and quiet.

All in all the visit to the London Wetland Centre proved to be both extremely
enjoyable and rewarding. A visit we are likely to repeat in the future. We thank
Peter Day very much for organising it and proving to be an excellent host. 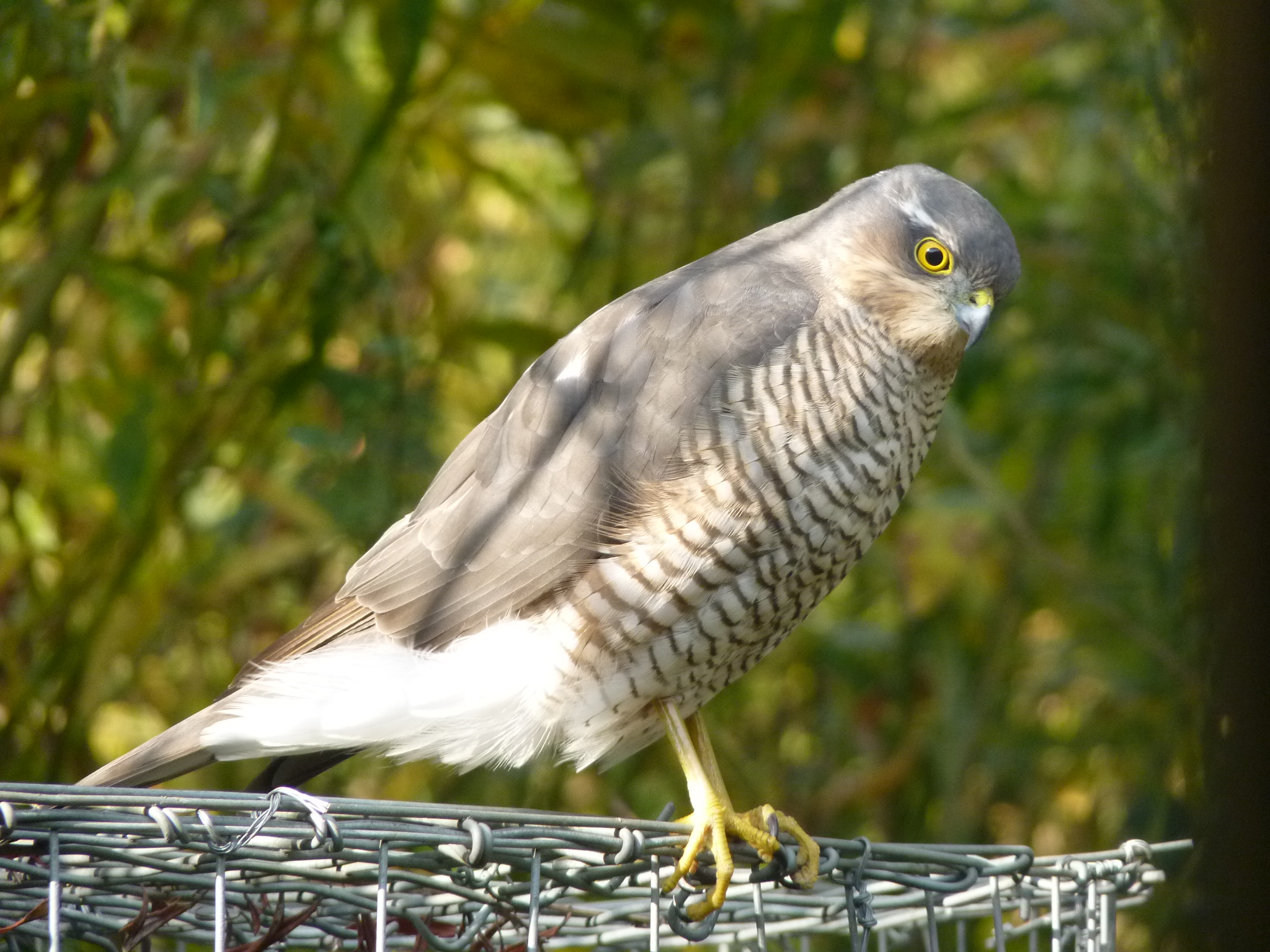 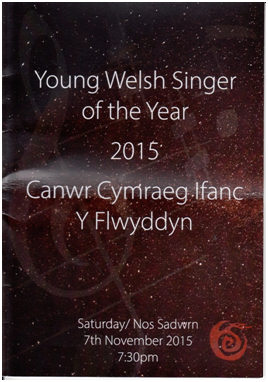 This competition is held biennially at the London Welsh Centre (“Y Canolfan”) at Gray’s Inn Road in central London. It is open to promising singers who must be aged under thirty and with strong Welsh connections, either from Wales, of Welsh descent or studying in Wales. They compete for cash prizes as well as the prestige of winning.

A small band of members made their way there by car to be joined by others already up in town. We met up in the large lounge bar upstairs for drinks and platters of sandwiches before making our way into the small concert hall for the main event.

Six outstanding young singers had made it through to the evening’s final round. They included Rhiannon Llewellyn, who many members will remember for entertaining us so well at the Society’s St David’s Day Dinner back in 2014.The three previous competitions were all won by young men but unusually on this occasion the finalists were two mezzo-sopranos and four sopranos.  But what beautiful voices we enjoyed. Each sang three pieces including one song in Welsh. Every member of the audience had been given a voting slip to choose our own favourite based on the singing of the Welsh song, which singer would win the Audience Prize.

As the judges retired to make their decisions, we were entertained by the winner in the “best newcomer” category. This was a young baritone, Lukasz Karauda. A native of Poland, he is a recent graduate from the Royal Welsh College of Music & Drama.

We all agreed how difficult it was to judge the overall winner, yet all of us voted for Carly Owen to receive our “Audience Prize”. This Soprano from Bangor duly won not only the Audience Prize but the overall First Prize too.  Our very own Rhiannon Llewellyn, who went to school in Chalfont St Peter, won the second prize; with third place going to Celine Forrest, who featured in the final of the BBC Cardiff Young Singer of the World competition on TV in June this year.

Afterwards we were invited to retire to the bar once more to enjoy a drink with bara-brith and welsh-cakes. This gave us the opportunity to chat to the contestants. Rhiannon told her fellow contestants how much she had enjoyed singing for our Welsh Society last year. She is now married and an “Army wife” living in Germany. Celine Forrest had been scheduled to sing at our 2016 St David’s Day Dinner but apologised that she couldn’t now make it due to sponsor commitments. However she assured us charmingly that her replacement is just as good! If so we are in for another treat on March 1st.

On a sunny Saturday morning on 26th July a group of about a dozen members met our guide Caroline James, at the foot of The Shard to explore sites around Southwark. 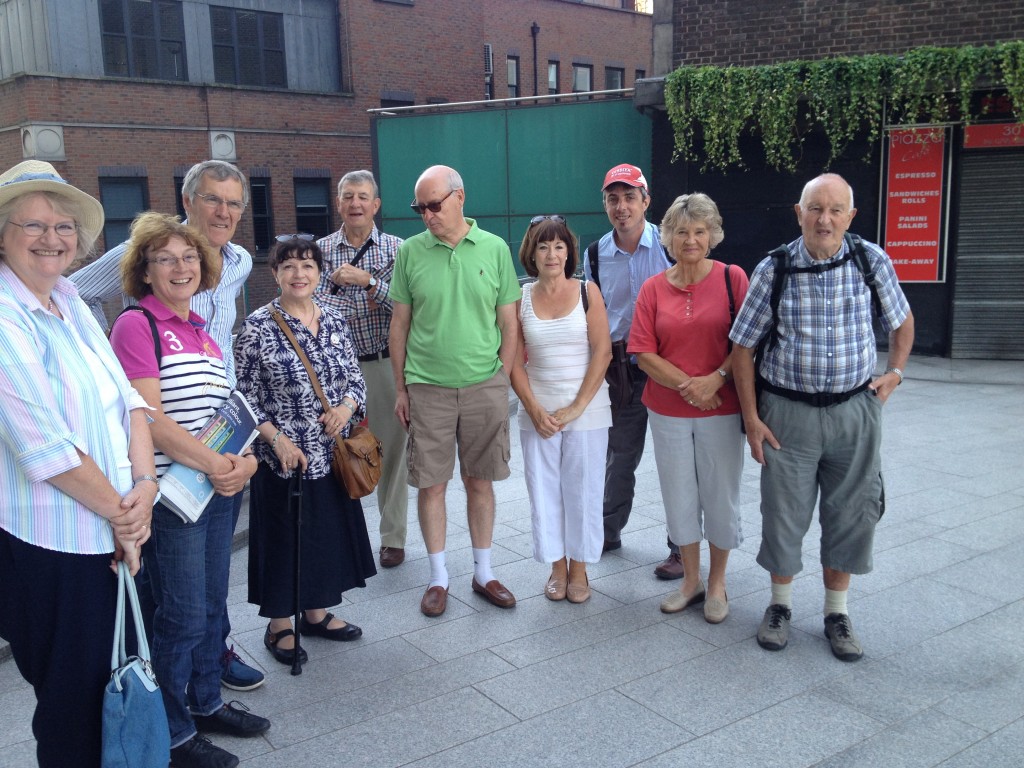 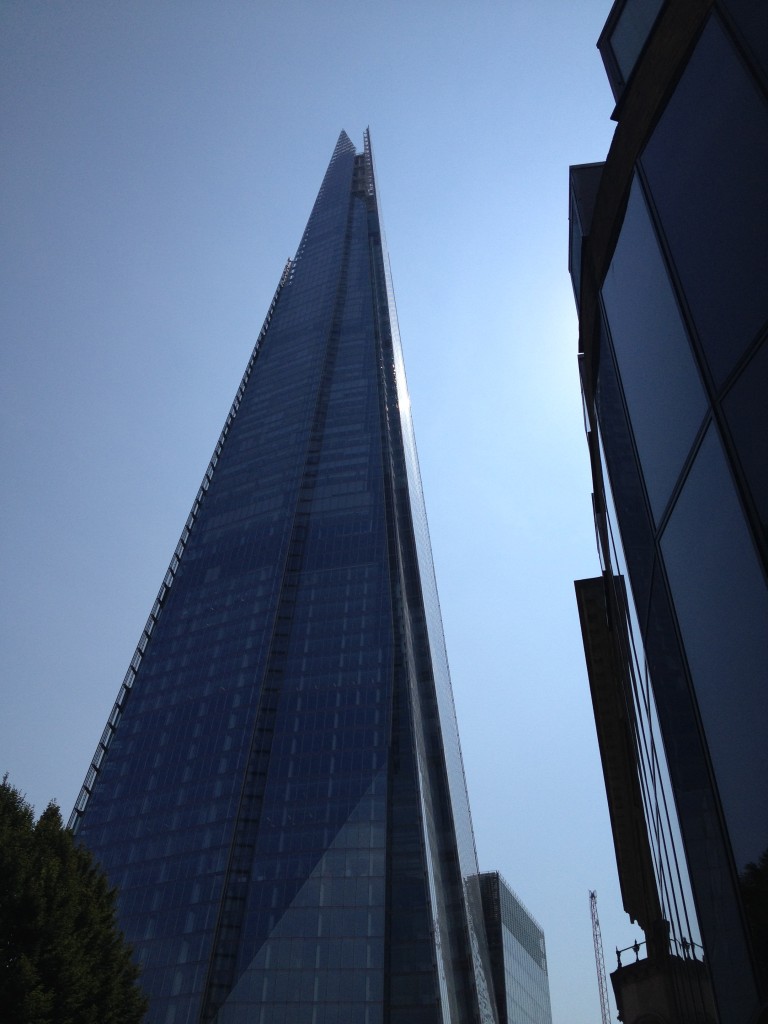 The area is at the southern end of London Bridge which in Medieval times was closed at night.

Many inns were built there and thrived as staging posts for travellers. Theatres opened there, as did hospitals for the poor, sick, incurables, and homeless.  Bear baiting, prostitution, and similar activities, which were illegal in the City, all flourished. 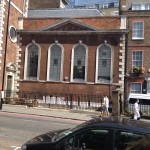 The ‘garret’ of the c17th St Thomas’ hospital houses its c19t operating theatre.

Betsi Cadwaladr from Bala worked there. She worked as a nurse in the Crimea with Florence Nightingale though their personalities clashed as they were from completely different backgrounds.

In the collonade of the adjacent Guy’s hospital a niche, from the old London Bridge, houses a statue of Keats. 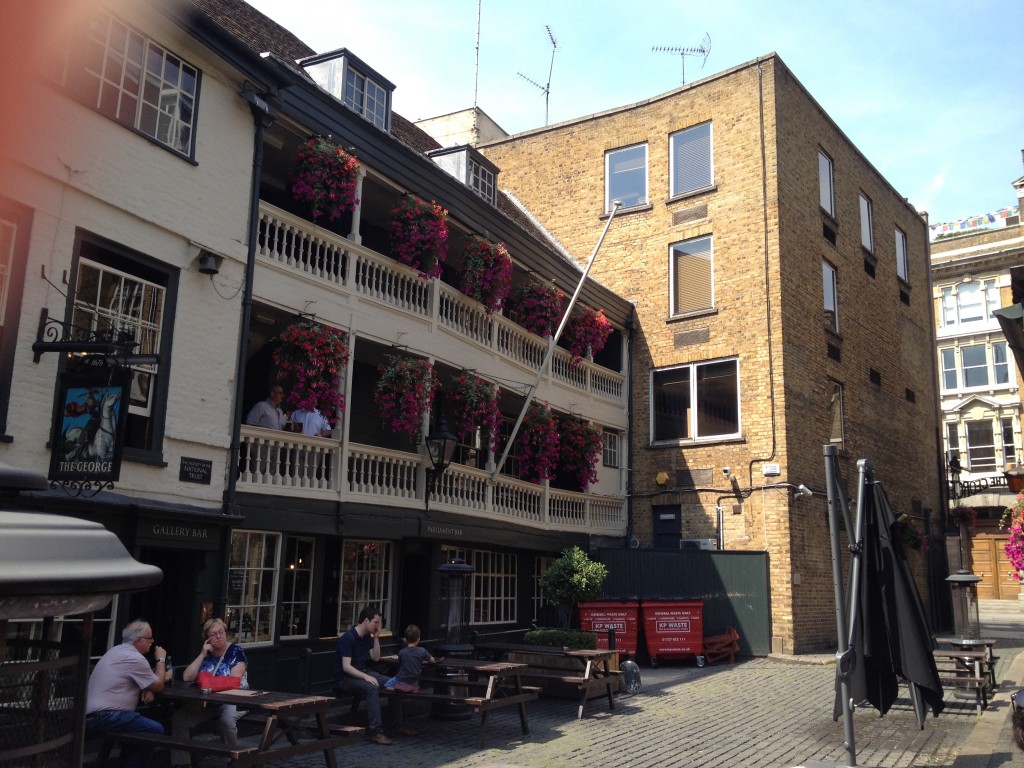 Off a short stretch of Borough High St are the ’Yards’ of many ancient galleried inns. Only the splendid George Inn remains and is often seen in historical films.
Little Dorrit Park and Marshalsea Rd were reminders of Dickens stories set in this locality. 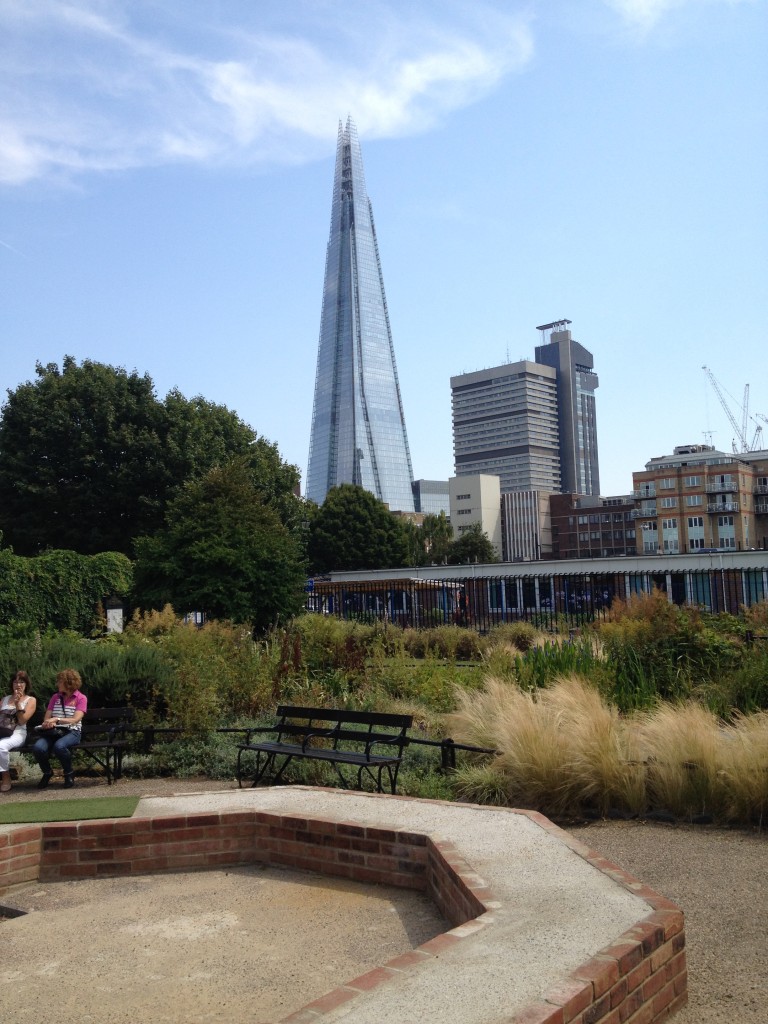 Nearby Redcross Gardens with its gabled cottages are a haven of serenity. They were founded by Octavia Hill who was one of the founders of the National Trust. 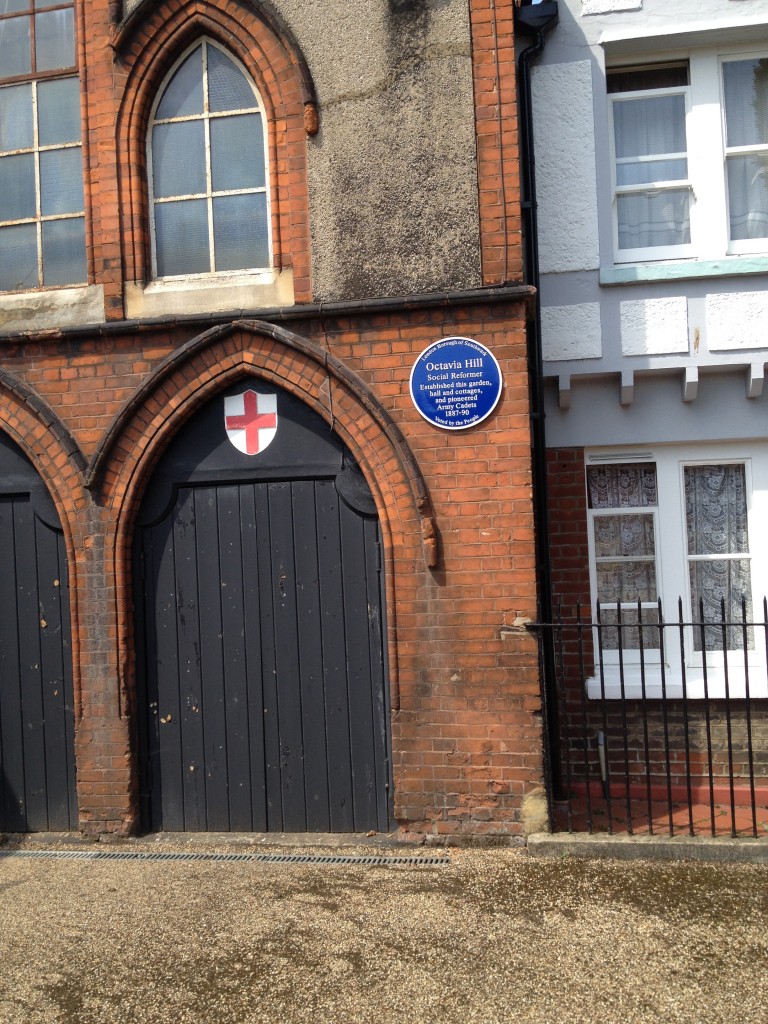 In Tabard St the Cross Bones graveyard is an overgrown, unconsecrated plot where about 15,000 bodies of suicides, prostitutes, plague victims and other ’undesirables’ are buried. We all felt sorrow just being there.

The Welsh Borough Chapel has just been renovated. One of its founders was ‘Gin Shop Jones’. An old sign on its rear wall reads ’Commit No Nuisance’ 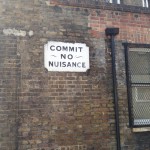 From near the Globe theatre the dramatic view across the Thames included the recent ’Gherkin’,  ‘Walkie Talkie’, and ’Cheesegrater’ buildings, all of which were outshone by glorious St Paul’s. 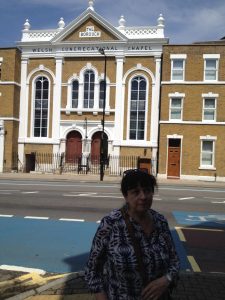 the 18th century had the greatest output in the world. The wife of it’s owner, Henry Thrale MP, was Hester Salisbury  a socialite from a wealthy Caernarvonshire family.

Little remains of Winchester Palace from which the Bishop once issued permits for prostitution in the area (these poor girls were known as Winchester geese).

We concluded our walk at Southwark cathedral and thanked Caroline for planning a walk with such a variety of places of interest to show us.