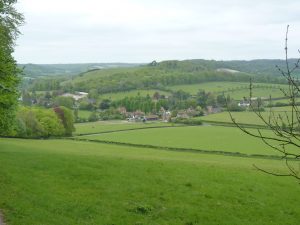 The Hambleden valley was the perfect location for the Society’s Spring walk on May 9th. It shows England at its very best with the idyllic villages of Fingest, Skirmett and Turville, beautiful rolling countryside and quaint pubs. 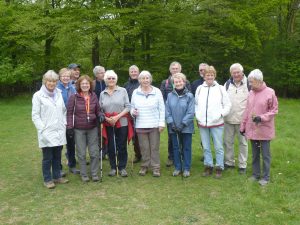 Sixteen members met at The Frog at Skirmett at 10 o’clock on a dry but quite chilly morning. As a large herd of deer grazed in the distance we were glad to get going. The walk took us across the valley, up a gentle slope through Adam’s Wood, passing a field of rare breed sheep and lambs. Even those of us with an agricultural background were unsure of the exact breed! 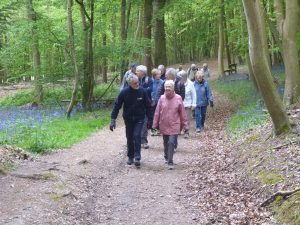 Through the bluebell woods

We were in luck as there was still a fine display of bluebells scattered amongst the trees. When we emerged from the wood we were greeted by marvelous views taking in the villages of Fingest and Turville below us. Turville is often used for filming episodes of Midsomer Murders and The Vicar of Dibley is set in the local church. 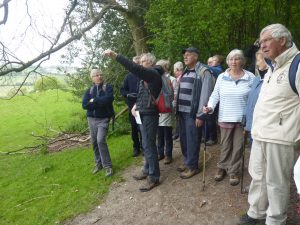 The valley and surrounding hills are a haven for wildlife and flora and one of the highlights of our walk was Janet enthralling us with her knowledge of the local wild flowers. As well as naming the myriad of tiny hedgerow flowers, which many of us had not even noticed, she educated us on the subtle differences between different species. Who knew there were so many species of buttercup! We all gave her our full attention suspecting there might be a quiz when we returned to the pub! 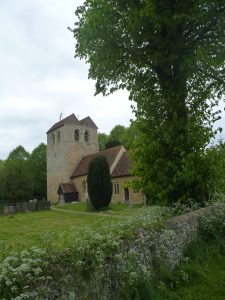 Even though we were given the option of following a shorter route we were all made of sterner stuff and completed the full distance of Gwyndaf’s 3-4 mile walk, returning to Skirmett via Fingest and its ancient church. This is a Grade 1 listed building with a tower dating from the early 12th century. Surrounding the church is a cluster of medieval and Georgian houses and cottages. 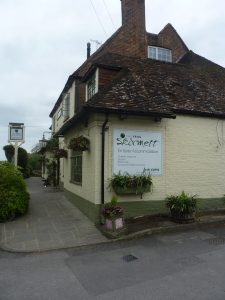 We were all looking forward to our lunch at The Frog and we were not disappointed. The food was excellent and it was difficult to resist those tempting desserts!

Our thanks to Gwyndaf and Janet for organising such an enjoyable and interesting Spring walk.

We all gathered at Coleshill Village Hall at 7pm on Friday 5th May, for our 2017 AGM.

Chairman, Kay Day, called us to order at 7:30 and we went through the ‘official’ business of the evening. Kay recounted some of the trips and events of the past year and mentioned some of the planned events for the rest of the year. 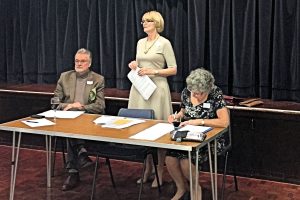 Membership is now at 129 and Jonathan Pegler (standing in for Treasurer Graham Beavan) reported that our bank balance has been managed down to the target figure through subsidising some of the events.
All committee members were willing to stand again and were duly re-elected , and Kay agreed to continue as chair for an additional third year. Jonathan, on behalf of the members, thanked Kay for her leadership and presented her with a bouquet. We are happy to announce that Rob Britton has also agreed to join the committee.

After the AGM we enjoyed an excellent supper supplied by Ann Tennant’s team, we settled down to an evening of Magic.

Mike Smith was introduced as a holder of the Silver Star award which is the highest achievement given by the Inner Circle and its House of Magic, which is in a secret location. 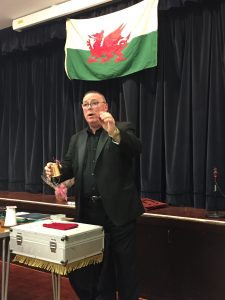 Arranging us into a loose semi-circle around him, Mike started by saying that he was a Mentalist and was going to give us an observation test. His constant chatter, was accompanied by his producing a red ball, which in turn appeared and disappeared. With his jacket sleeves rolled the ball was either in his hand, in his pocket, or simply turning into a piece of fruit. Card tricks are a staple diet for magicians and  Mike was no exception and had us all marvelling at his sleight of hand. 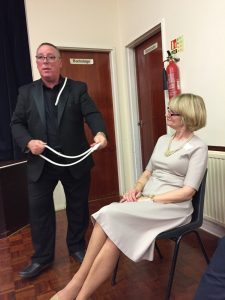 Mike then produced three lengths of rope, duly inspected by a member of the audience,  that they were quite ordinary and were of different lengths. Mike then proceeded to manipulate the lengths into one long one, then two long and one short, then into a complete circle and so on. He then turned his craft to fool us with various dice tricks. Just when we thought that we had ‘seen through’ the deception, we were surprised, yet again, by another turn of events.

Next came a hair-raising feat with paper cups, placed over numbered small blocks. One block held a vicious large spike. As each member called out, at random, a number, Mike slammed his hand down smashing the cups. The last number, obviously the one with the spike, was the number not called out. We all held our breath.

Mike then announced that he was also a psychological magician and a mind reader. Producing a book he asked two members to pick out, from any page, a letter, which they were asked to tell him. They were then asked to pick from the book a word starting with that letter of more than five words, but to keep it secret. Mike proceeded to guess the correct words. It was all very spooky.

The evening ended with Mike seemingly swallowing, with great ease, a fully blown up balloon under our intent gaze. It was an evening of high drama thoroughly enjoyed by all.