As a change from our usual January Quiz Evening, this year we had a Cheese & Wine (& Beer) event. Approximately 40 CDWS members assembled at 7pm in Coleshill Village Hall (26th January). 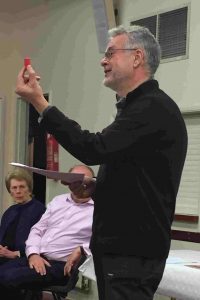 Jonathan Pegler had scoured the country for Welsh Cheeses, and even a Welsh wine. He started by teasing us with the question of which was best with cheese – red, white or beer, then explained that it all depended on the type of cheese, but beer usually worked (think Ploughman’s lunch).

Jonathan had done his research and was able to describe in some detail each of the various beverages and cheeses we were about to try.

Cheeses came to each table two at a time and everyone could choose what should go with each. The seven cheeses varied from Brie-like, through Caerphilly to strong tangy cheddars (most people’s favourite). Among these were a smoked goat’s cheese which divided opinion between those who loved it, and some who thought it inedible. 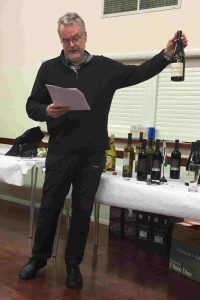 There were two wines, two whites (including Glyndwr from the Vale of Glamorgan) and two full bodied reds from France and Italy.

We all had notes with the names and sources of each cheese and wine, with details of the suppliers, and Jonathan asked us to guess which were the most and least expensive of each cheese, wine and beer. Jonathan and Graham Beavan also had several additional bottles of wine and beer which people could buy at cost. They did a roaring trade.

We finished the evening around 9:30 or so and everyone thought that this was nice to have a change. Thanks to Jonathan for his painstaking research and entertaining talk.