Well, I think that went quite well.

The coach picked us up from Gerrards Cross and Amersham at 8:45 and 9am respectively (only a little bit late). Altogether we had a party of 28 in a large coach with plenty of room, and sitting up high we were able to see all the countryside over the hedges.

As soon as we were on our way, David Powell told us of a change of plan – Trinity had declared themselves closed for the day, right at the last moment, so we were going to St John’s and Clare colleges instead.

The weather was fine and sunny, which was a great bonus. We arrived at Cambridge just before 11am, having made good time on the way and were met by our two guides Ann and Helen.

On Jesus Green, by the River Cam, we split into two parties for the tour, and walked along the river bank to Magdalene Bridge. This was our landmark as it was next to both St John’s and the punts. 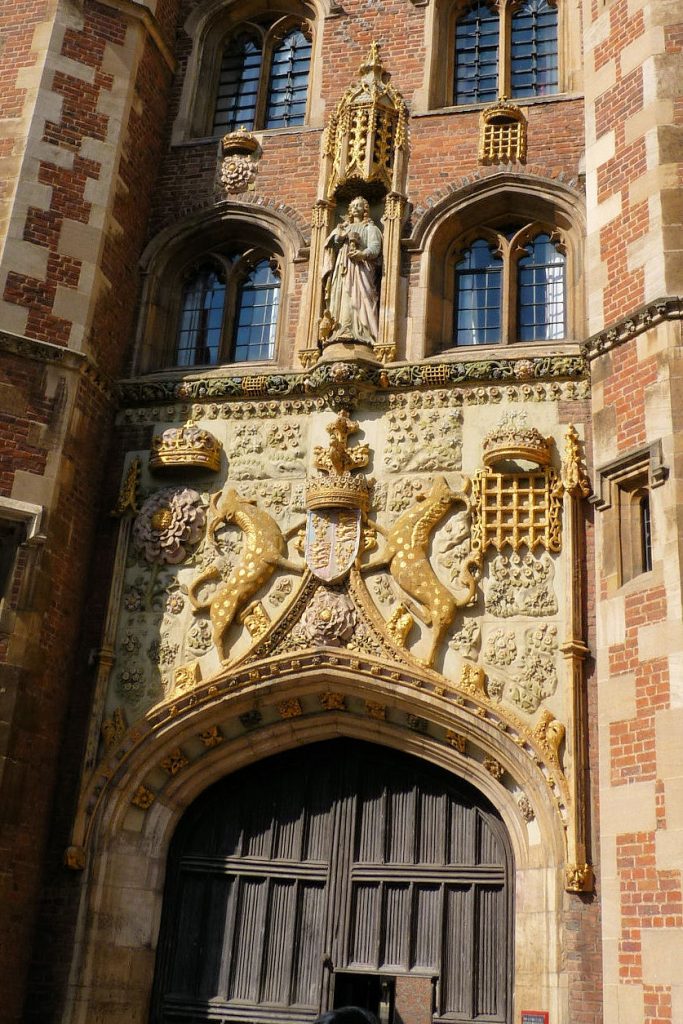 St John’s College was founded by Lady Margaret Beaufort (mother of Henry VII) in 1511, and images of her can be seen in many places within the college grounds. One of the largest colleges in Cambridge, its entrance with the Great Gate is suitably impressive with a large statue of St John above the coat of arms of Lady Margaret. The curious animals depicted are yales, mythical animals with swivelling horns! 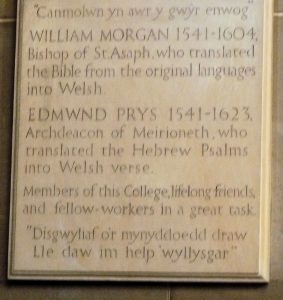 One of St John’s claims to fame is that it was the college where, in 1588 William Morgan translated the Bible into Welsh (well before the English publication).

St John’s has numerous courts, each built in a different century. We stopped for a group photograph in the first court dating from 1520. 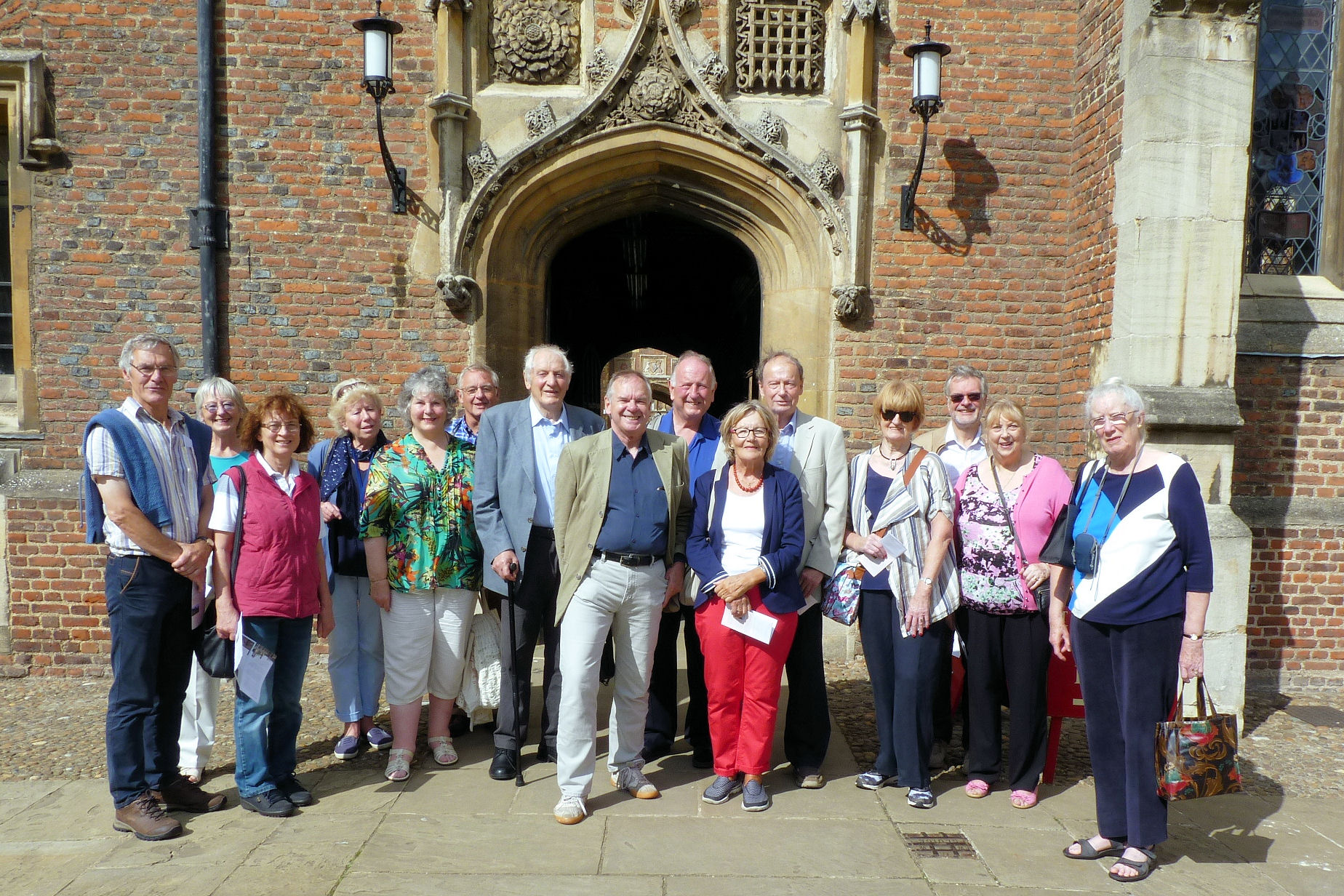 Our guides took us through the various courts explaining their architecture and the source of their funds. We crossed the Cam to see the Bridge of Sighs, named after the original Venetian bridge. It leads to the Victorian Gothic New Court both of which were built in 1831. 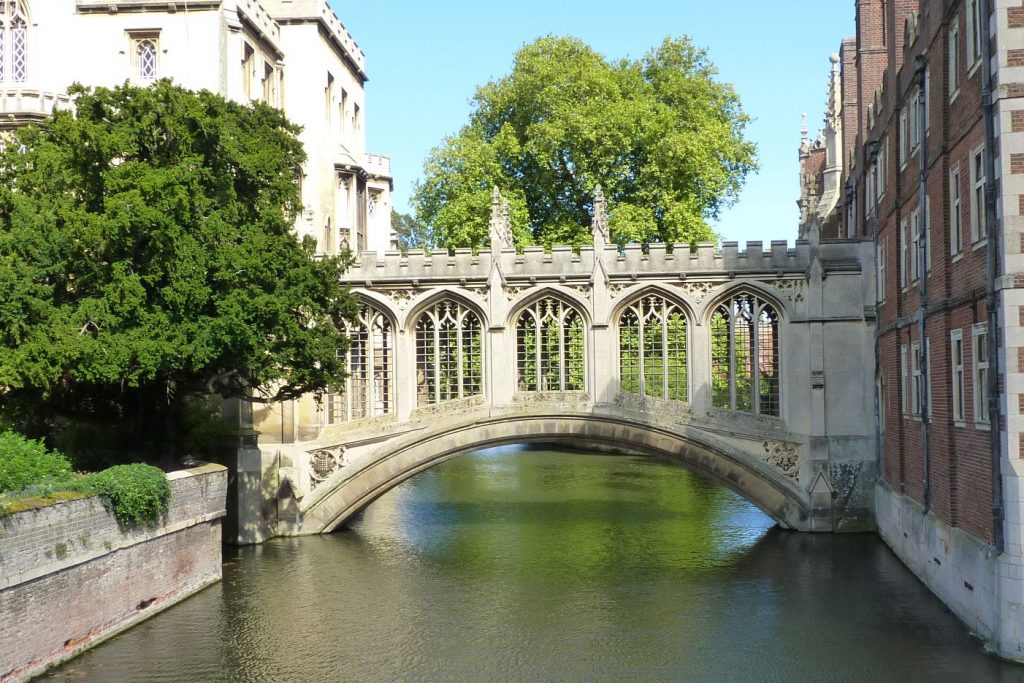 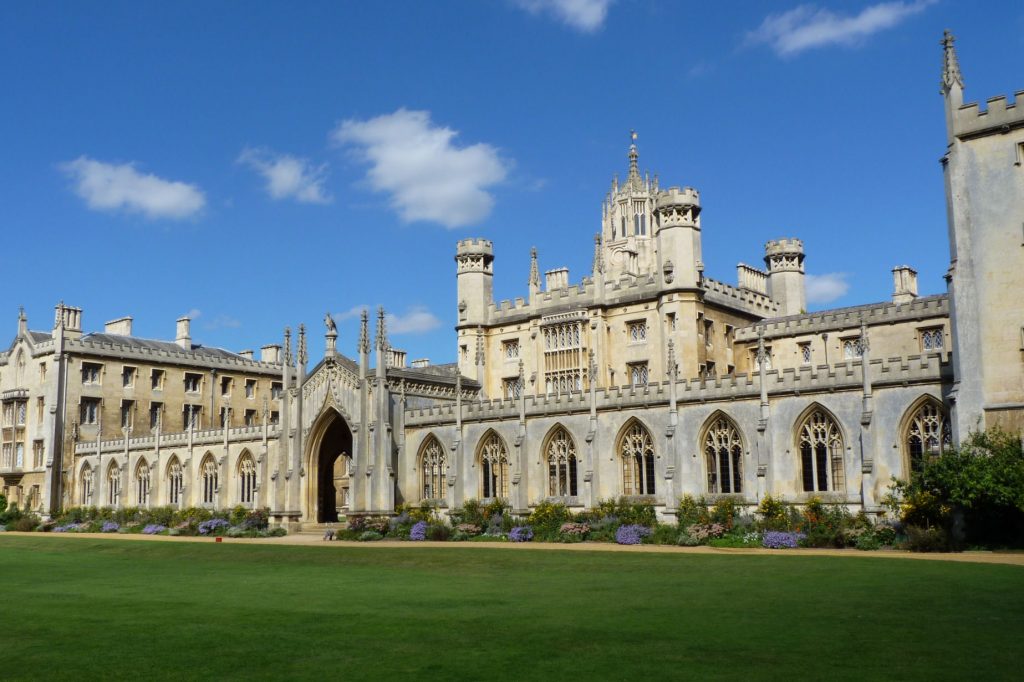 From St John’s we proceeded past the gates of Trinity and along to Clare College, the second oldest of the Cambridge colleges, founded in 1326. In fact, much of the college was rebuilt in the 17th century, to accommodate the newly built King’s College Chapel, though work was paused during the civil war. We visited the chapel with its impressive altar piece by Cipriani and an unusual octagonal antechapel. 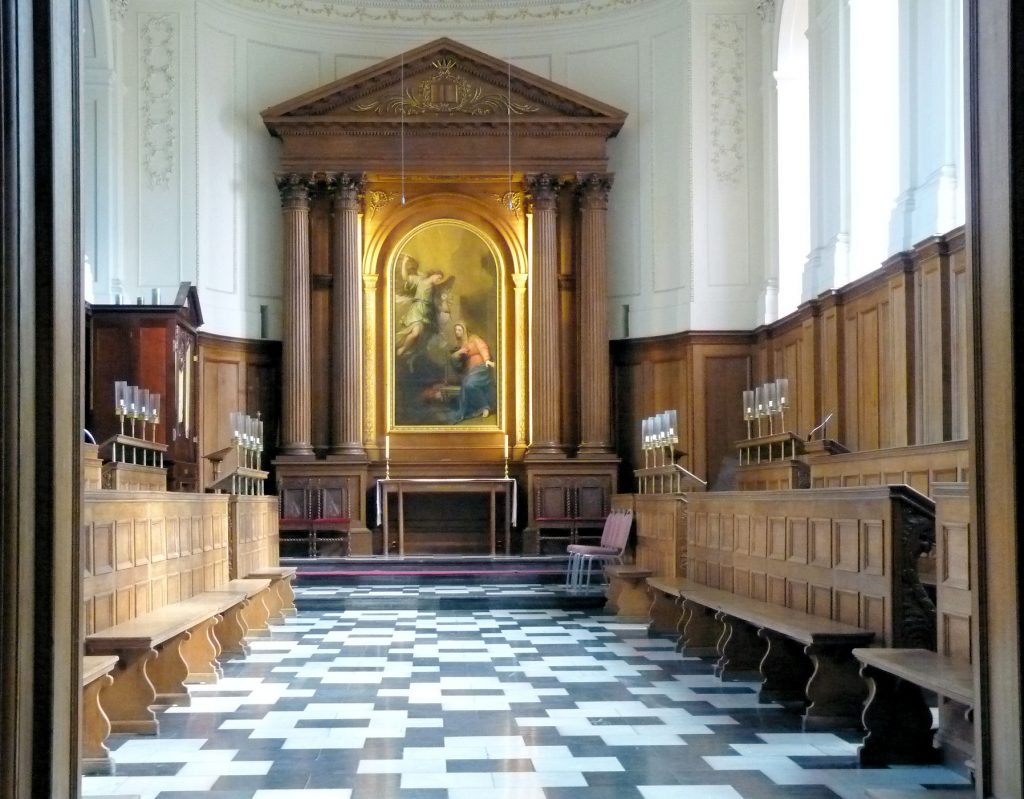 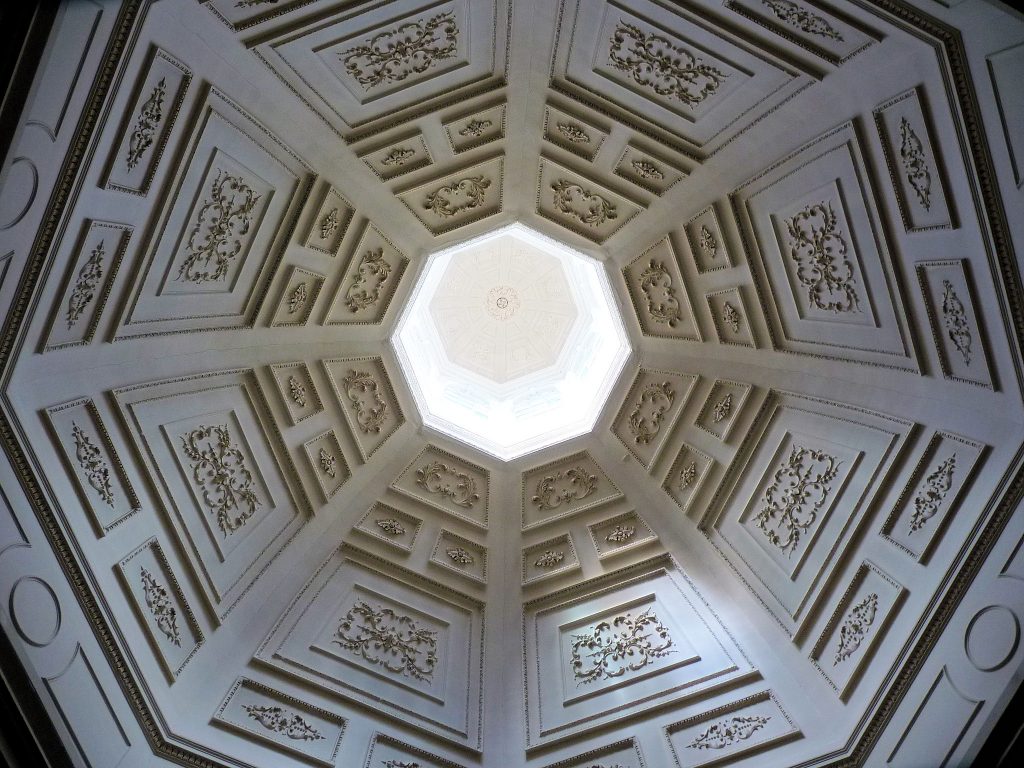 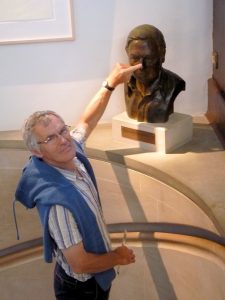 Nearby is a bust of Sir David Attenborough – with a shiny nose – it has become a new tradition for students to rub his nose for good luck! 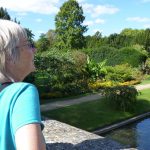 Probably the highlight of the visit to Clare was the Fellow’s Garden. This was re-designed in 1947 by Professor Willmer, whose artist’s eye added swathes of colour and carefully planned vistas to the two-acre site, all along the bank of the Cam. We were really lucky with the weather and the sunshine showed the gardens at their best. 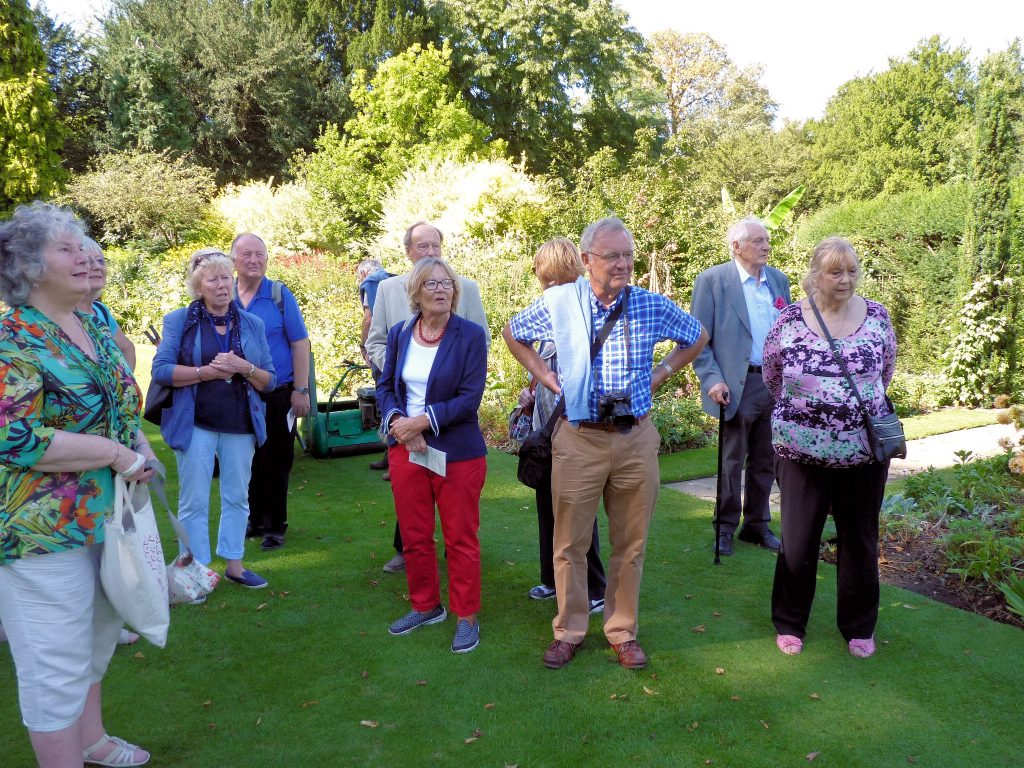 We finished our visit back by King’s College Chapel, the tour had overrun, but nobody minded. We were then free to do our own thing for the next couple of hours.

This showed the real variety of tastes within our Society. Some hurried off to see the display of illustrated manuscripts from all over the world on display at the Fitzwilliam museum, or managed to fit in a tour of King’s Chapel.

Others spent the time wandering around the city, finding nice places to eat and admiring the rest of the college architecture.

While yet another group dashed off to visit one or more of the famous pubs!

Whatever the destination, there was still time to fit in a spot of punting – either with a guide or self-propelled. 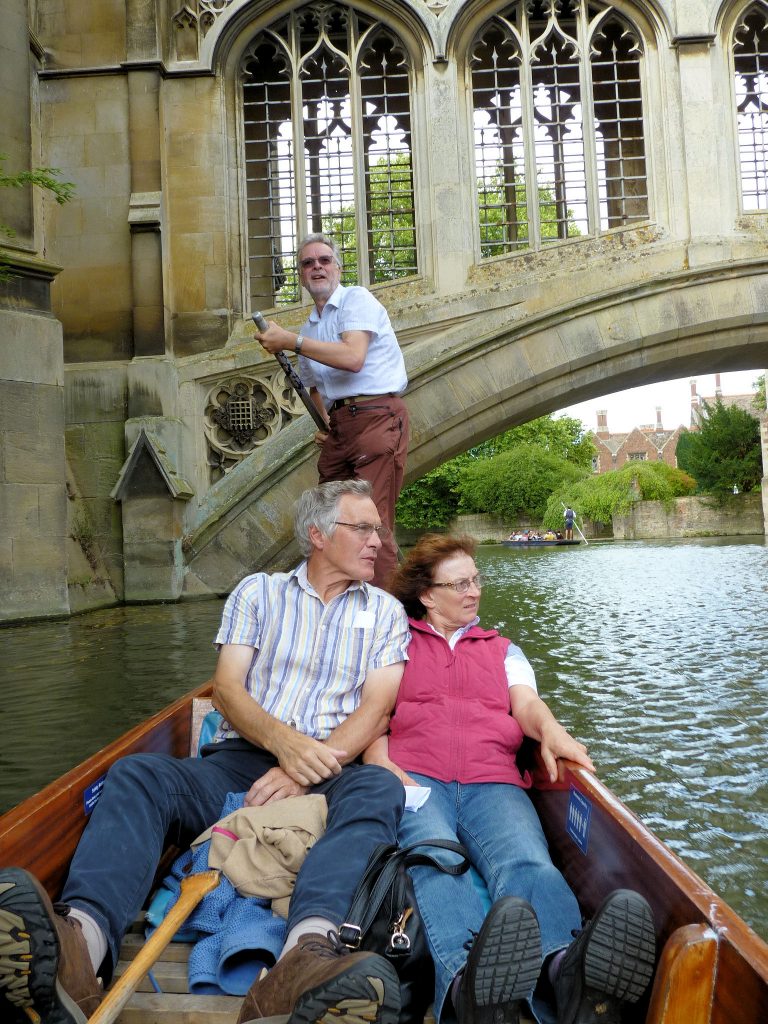 By 4:30 people had meandered their way back to the footbridge over the Cam by Jesus Green, where our coach was waiting. David had to act as ‘whipper in’ to those who were enjoying a last minute ice cream.

The coach left on time, with only a last minute delay in Amersham making us late. Everyone agreed that it was a great day out.

And only one of us fell in the Cam.