Early morning, 16 October 2015: a party from the Society set out for London to visit both the BBC and the Fullers Brewery.  The coach dropped us in Portland Place, outside the BBC, in good time for security checks and a coffee; and in New Broadcasting House we formed two groups to start our tour.

The first stop was above the news floor, a familiar view for TV watchers.  Having seen how UK and World news services are produced, we moved to the One Show studio, which was much smaller than it appears when the TV show is transmitted.  It’s quite amazing how they get so much done in this limited space. 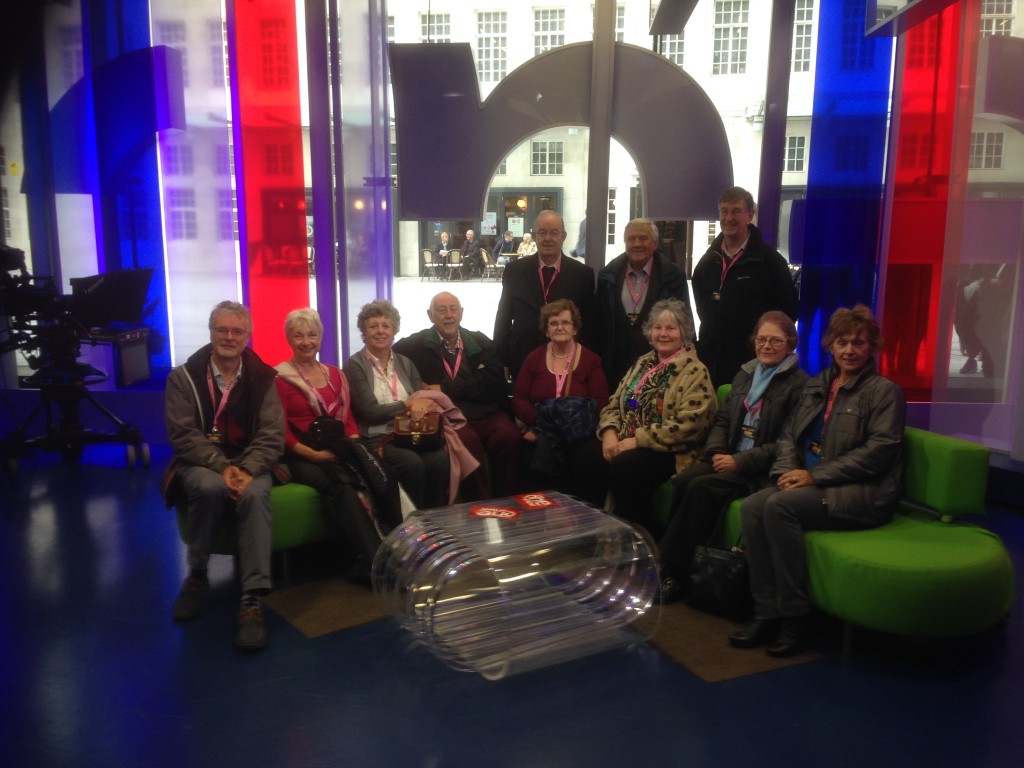 CDWS at The One Show Studio

In contrast to the TV facilities we visited the beautiful Art Deco Radio Theatre, which not only is the venue for many music concerts but also has been the home for famous comedy programmes ranging from The Goon Show to the News Quiz.

In order to encourage us to participate in “live TV” our guides allowed volunteers to present news reports and weather forecasts.  And then, to ring the changes, we saw some items of historical and artistic interest; and were reminded of some past events which highlighted the BBC’s important place in UK history.  By this time we had been outside in the impressive courtyard and had now reached the creatively named “Old Broadcasting House”!

Back to participation, we took roles in a scary radio play, with sound effects and a gruesome climax.  It gave the volunteers a chance to experience microphone technique and instant acting.

Overall the time seemed to go quickly although our guides always seemed to have time to answer our questions and give us context.  At lunch afterwards there was general acclaim for the enjoyable tour.

We left Central London for Chiswick in order to do our tour of the Brewery.  Again, in two parties, we saw how water, barley, hops and yeast are skilfully combined to produce London Pride and a range of other beers, exported now to over 60 countries.  Fuller Smith and Turner, the full name of the company, is still a family run business which recently acquired Gales Brewery in Sussex.

Inevitably the tour ended in the bar for a trial of the products – what a hardship!  It was then left to Derek our coach driver to cope with the Friday evening rush hour traffic and get us safely back to the Gerrards Cross and Amersham drop-off points.  Well driven; and the tour was very well organised and led by Graham Beavan, who certainly deserved all our thanks.

Colin, our coach driver, picked each group up at the allotted time and we set off for our five day trip to Brecon. We made good time and were able to stop in Burford for a quick look around and a coffee. Then on to Monmouth, which proved to be very rain swept, for a longer lunch stop. The local conveniences proved to be an excellent place for us to shelter, while waiting for the coach to return to take us to Tretower  Court and Castle. This was a beautiful medieval building, all the more atmospheric in the swirling mists. We were given a lively talk and then allowed to stroll around for a while before heading off to the Castle Hotel, Brecon, where we were booked to stay. 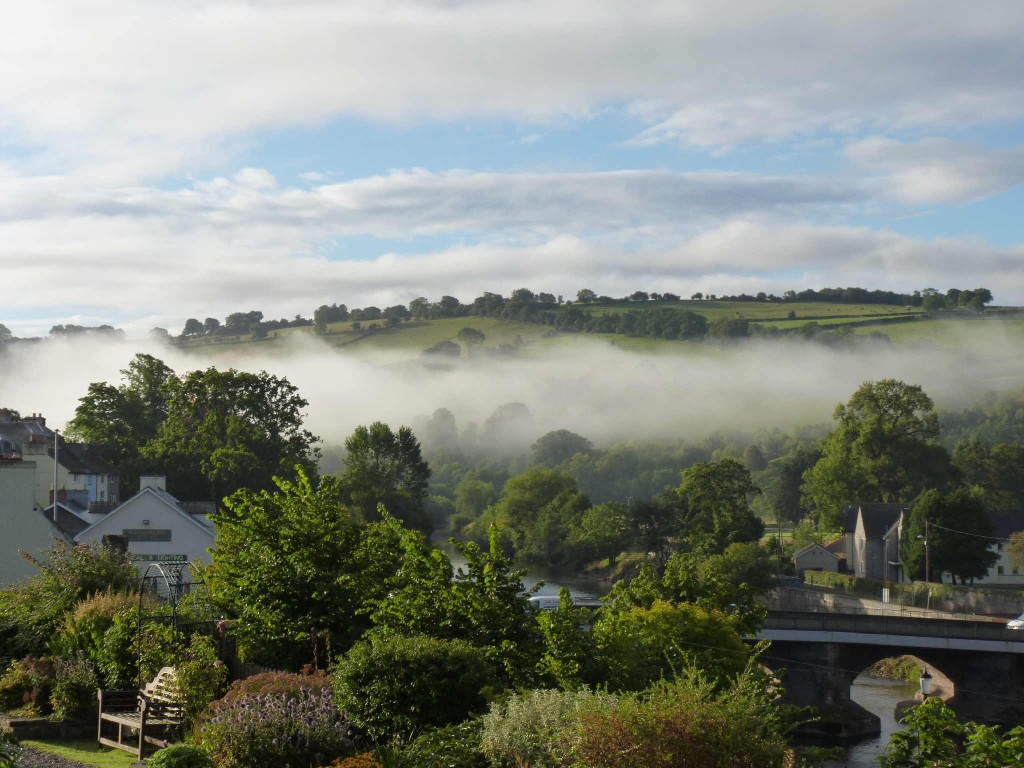 During the coach journey, Jonathan began to enlighten us with the varied stories of some of the historic families we would be following during our tour, in particular, Sir David Gam and his lovely daughter Gwladys.

Not everyone knew of The Castle Hotel’s illustrious past, having been chosen by Alex Polizzi  of Hotel Inspector fame to turn it around! The most infamous room was Number 18 and by coincidence, Colin and I were the lucky guests to be allocated this room! All however, was well!

The following morning, after an ample breakfast, we set off for Hereford Cathedral, where we had the opportunity to see the famous Mappa Mundi, the Chained Library and a copy of the Magna Carta. We had also all been given the chance to choose either the tower tour or the garden tour, both of which were wonderful. Whilst here, we had the opportunity to listen to an organ recital or to continue looking around the cathedral.

From there we travelled to Talgarth Mill for a tour of the working flour mill and an opportunity to have afternoon tea. Here the guides were both very enthusiastic and knowledgeable but at times had to admit defeat due to the ‘Barry effect’, when one of our group, who was just so curious to know all about the mechanical workings, plus accurate measurements, made them struggle for  answers!! 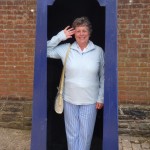 The following morning we departed for Hay on Wye where we had ample time to explore the town with all it’s many retail opportunities. From there we travelled back to the Regimental Museum of the Royal Welsh in Brecon and we had a lengthy talk by one of the resident regimental historians. 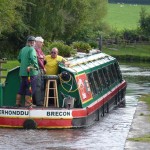 Most of the group then walked down to the Monmouth and 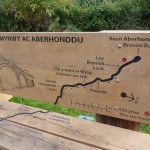 Brecon canal to the narrow boats where we cruised part of the way along the canal, through peaceful countryside at a very gentle speed! For the return journey several of the group decided to walk swiftly back, to work up an appetite for dinner!!

On Thursday morning we set off for Aberglasney Gardens, via Llandeilo, which happened to be the birth place of one of our party, strangely we couldn’t find the blue plaque! Aberglasney Gardens were beautiful in their early autumn splendour. To begin with, we had an enlightening talk from one of the guides, then were able to explore at our leisure before continuing to Newton House and Dinefwr Castle.

Here we had two enthusiastic young guides who, with their lively repartee, informed us of the history of the house, the castle and grounds.  The brave, or foolish, were allowed to climb up onto the roof of the house to get a wonderful view of the estate, including the famous white cattle and the deer. Some even managed the climb to the top of Dinefwr Castle, which was close by, for more wonderful views.

Our final day took us to Abergavenny, where we visited St. Mary’s Priory and saw the remarkable carved Jesse Tree and the Millenium Tapestry and finally put a face to the name of Gwladys, as she lay serenely carved in marble, in the chapel. 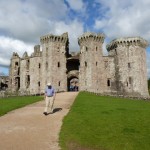 The next stop was Raglan Castle, where we were able to climb towers, explore dungeons and enjoy the wild, windswept scenery and take many photos.

The final visit which Jonathan had organised was to a wonderful vineyard, Ancre Hill. Here the owners gave interesting talks about growing grapes, wine tasting and their vision, which has allowed it all to happen. Extremely interesting plus the wines and cheeses were quite delicious.

So back on the long road home which became even longer due to local accidents and excessive Friday traffic. However everyone was agreed that we had enjoyed our Brecon trip due to excellent planning by Jonathan and the friendly company of the Chiltern Welsh members who attended.