What a difference in the weather this year! Last year a sudden snowfall prevented many people from attending the Christmas drinks event, but in 2018 the weather was mild enough to enjoy the garden, and about 55 people arrived instead of the 20 or so who were able to brave the snow last year.

Jonathan, Gwyndaf & David were on parking patrol, directing drivers onto neighbour’s drives and along the lane to the Jones’s house, and, on arrival, Kay placed a label on each person, to remind them who they were and to make conversation easier. 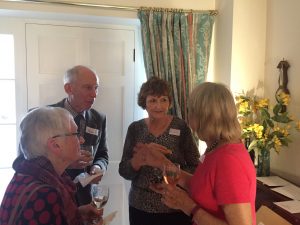 Bill & Sue Jones were excellent hosts, and, assisted by the staff of ‘To Dine For’, attendees were plied with canapés and drinks. Many people used the opportunity of such a large gathering to distribute Christmas cards and Kay also handed out copies of the Winter Newsletter.

Rob Britton announced that Peter Lawrence has just celebrated his 90th birthday and is marking it by swimming 90 lengths of the Amersham Pool over the course of a week for the charity Bloodwise. Not only did Peter achieve his goal, he exceeded it by swimming 100 lengths!  Rob ran a raffle to support Peter Lawrence’s chosen charity which raised £200.

Unfortunately, later in the afternoon, Peter Johnston suffered a fall and we needed to call the para-medics, who took him to the hospital. Happily after he was examined the doctors declared that he was fine and he was able to be sent back home.

After the ambulance left, with Peter looking somewhat brighter, Jonathan Pegler played the organ and Bill Jones led the singing of some favourite Christmas carols.

Instead of presenting the usual gifts to the hosts to show our appreciation, David Powell explained that Bill & Sue had requested a donation to the Woodland Trust in order to plant trees in Parc Mawr, Conway. Bill went on to describe the ecological background and benefits of the scheme, and, at the end of the afternoon, sufficient funds had been raised for six trees to be dedicated in the name of Chiltern District Welsh Society.

We all left at about 4pm. Many thanks to Bill & Sue Jones for being such welcoming hosts and to ‘To Dine For’ for the delicious canapes and attentive service.