The coach came to pick us up from Gerrards Cross at 7:45 – an early start! After picking up the rest of the party from Amersham, we set off for the two-and-a-half-hour journey to Bristol. Jonathan Pegler had planned and organised the event, and gave us an overview of what to expect and what to look out for as we travelled along the motorway.

Rain started falling as we headed west along the M4, but we were very lucky as it held off for the rest of the day, until the return journey. 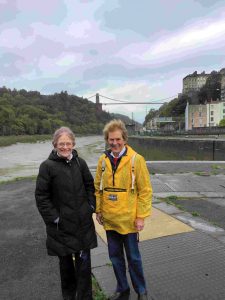 Muriel & Ann with Suspension Bridge in the background

Our first stop was at the famous docks, stopping at the Cumberland Basin, in front of two massive bonded warehouses built in the style known as ‘Bristol Byzantine’ which were used for storing tobacco. Jonathan had taken us to see ‘Brunel’s Other Bridge’. Now disused, it was a swing bridge across the Avon in 1849 and predates the famous Clifton Bridge.  Jonathan explained that the floating docks were created by digging a man-made ‘cut’ to divert the Avon, and putting lock gates across the original river to create a harbour where the level of the water could be preserved.

We walked around the Basin to reach the Underfall Yard. This is a small museum, originally a boatyard, then the centre of a sluice system (the underfalls) which helped remove silt and mud. It now contains exhibits showing how the docks were used, how the locks worked and how water pressure was utilised to work cranes, locks and other machinery. 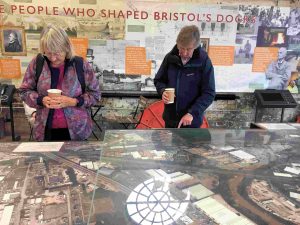 The party spent a happy half hour or so examining the exhibits and playing with the models. 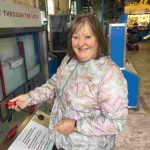 Kate shows how the locks work

We then all trooped off to board our sight-seeing boat for a tour of Bristol harbour. This was fascinating. Our guide took us right through the city from the Cumberland Basin to Temple Meads Station with many detours going through crowded shopping streets, quiet residential areas and some areas where the harbour had not been developed. 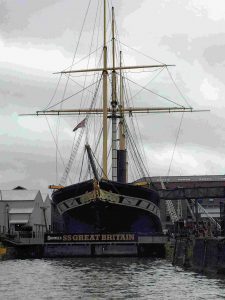 Most of us crowded into the front of the boat to get the best view of exhibits like Brunel’s SS Great Britain, old dockside warehouses, breweries and churches, whilst we were told about the history of Bristol and its trading past.

The boat dropped us off at Welsh Back, which was the area which used to be where Welsh goods such as slate were traded.

Jonathan led the party up to St Nicholas Market, where we dispersed for an hour or so, grabbing a bite to eat at one of the restaurants or from the street food stalls or making the trip over to see St Mary Redcliffe church with its soaring gothic columns. 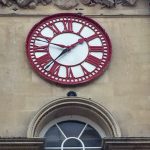 At 2pm Jonathan re-convened the party and led us around some of the sites of central Bristol including the famous Corn Exchange, with its two minute hands showing both GMT and local time, and the ‘nails’, small columns or tables where deals were transacted, hence the term ‘paying on the nail’. 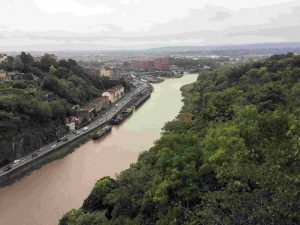 View of Bristol from the Suspension Bridge

After the tour, we climbed back onto the bus and travelled on up to Clifton, to walk over the suspension bridge and wander around the village, enjoying the coffee shops and large number of interior design studios.

We started our journey home with a ride around the Clifton Down area, a large open green space with great views over the Avon and across to the port at Avonmouth and some very impressive looking houses.

We set off back along the M5, with views of both Severn Bridges in the distance, and with Jonathan completing his story of Bristol with details of other sites that we hadn’t managed to fit into our schedule.

We arrived back at about 7pm and Colin Picton proposed a vote of thanks to Jonathan for putting in so much effort and planning for our trip, making it so informative and enjoyable.