What a scorcher! The weatherman said 30C, whilst one person leaving the lunch said her car recorded 33C. It was probably the hottest day we’d ever had for our annual summer lunch. And weren’t we all grateful for it. I’m sure that the committee had planned the marquees in case it rained, but weren’t we grateful for their protection from the sun? Not that we complained – it made us all feel very good.

And as people arrived we saw a large array of hats on display, topping lovely summer outfits. 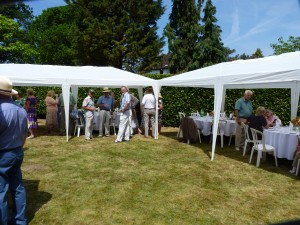 Had we had a best hat parade I would have given my gents vote to Bob Ford’s – what style! The ladies too had brought hats but most carried them in so I didn’t see too many being worn, but Pam Britton wore hers with grace. We mingled over drinks to catch up on gossip, using “ein hiaith” where we could, whilst Jean Owen and Muriel Knight distributed small posies of flowers which they’d brought along to brighten up the tables. 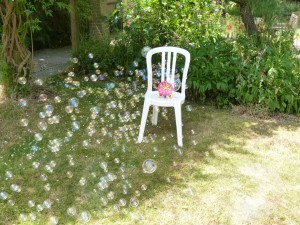 Janet John had brought along a bubble making machine which created a party spirit as the bubbles danced their way through the tents until their all too brief existence came to an end as they drifted into more solid things. 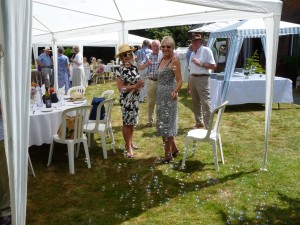 Irene Powell said one can get square bubbles these days! What good are the corners?

The day had started at 9:45 when a team arrived to erect the marquees, set up the tables etc. What team work! Thanks go to Colin Thomas, Alan Longshaw, Peter Johnson, David Powell, Maldwyn Pugh, Gwyndaf John, Jonathan Pegler and Bill Jones. Di Thomas too was busy making sure everything was as she wanted it (including laying down some more grit!). 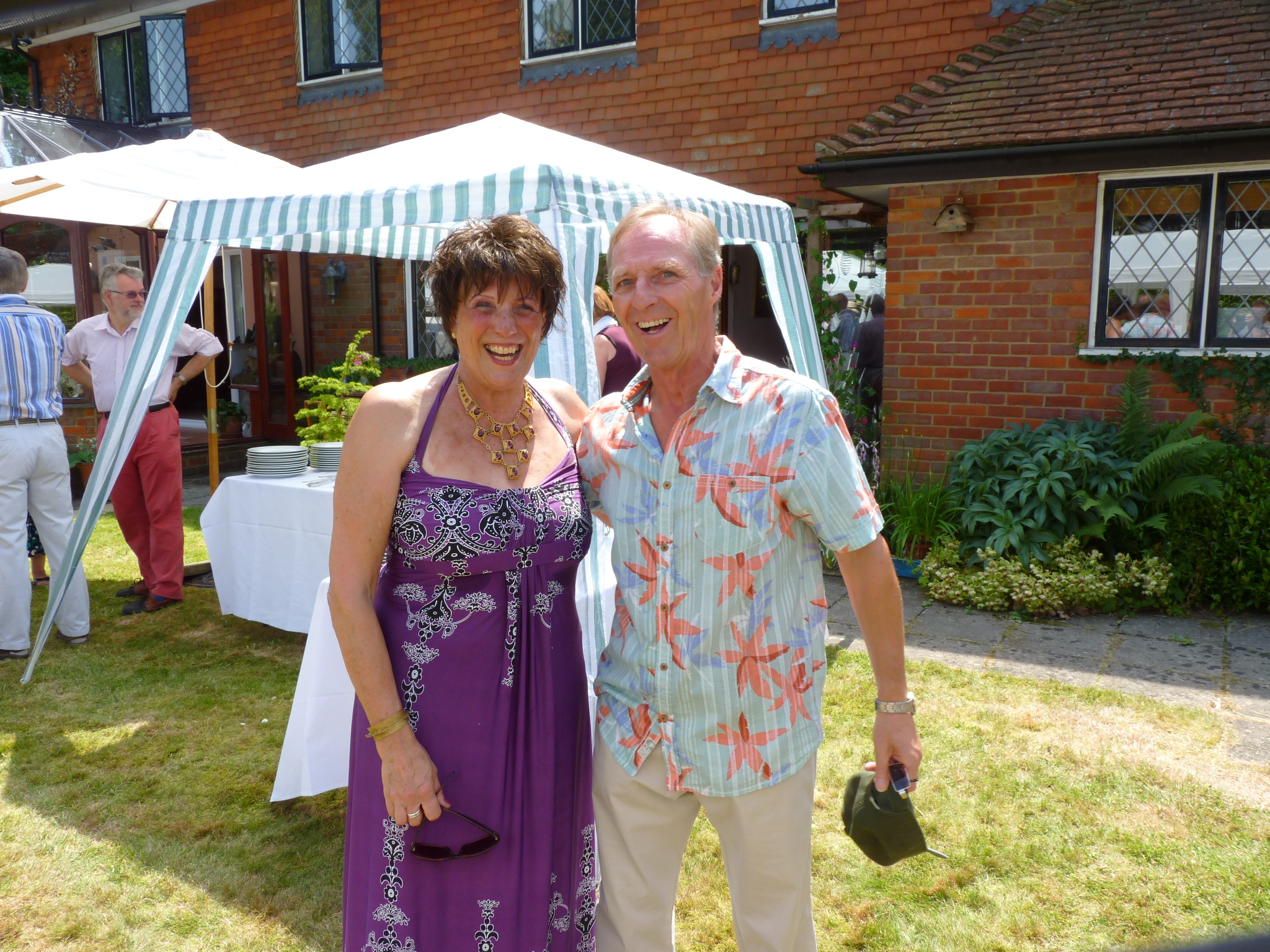 Let’s go further back…..the committee must have been preparing this day for many months. Di and Colin had kindly volunteered their lovely house – The New House – back in the Summer of 2012 so that the program could be printed. Maldwyn Pugh had secured the loan of the marquees from Little Chalfont Parish Council, whist Gwyndaf John and David Powell had collected them a couple of days before. The ladies in Ann Evans’s Welsh class had prepared the posies of flowers for the tables.

Colin also had his Moore and Moore pedal-powered harmonium carried out to help with the singing later on if required. It’s not far from a hundred years old (since M&M finished trading in 1921) and of course being pipe-based can’t go out of tune! Memories of the chapel flooded back.
Anyone passing The New House would have wondered why Welsh Flags were so prominent on the hedges on Windsor Road, but for us they were welcoming homing beacons! And so at 12:30 we came from far and wide to our annual summer lunch. Jonathan Pegler (our chairman) welcomed us and gave us the order of the day and thanked the caterer, Jill Mayo, and her team. She had also arranged the supply of tables and chairs. He then passed over to Gwyndaf to introduce the dreaded quiz. Don’t quizzes make you realize how little you know? 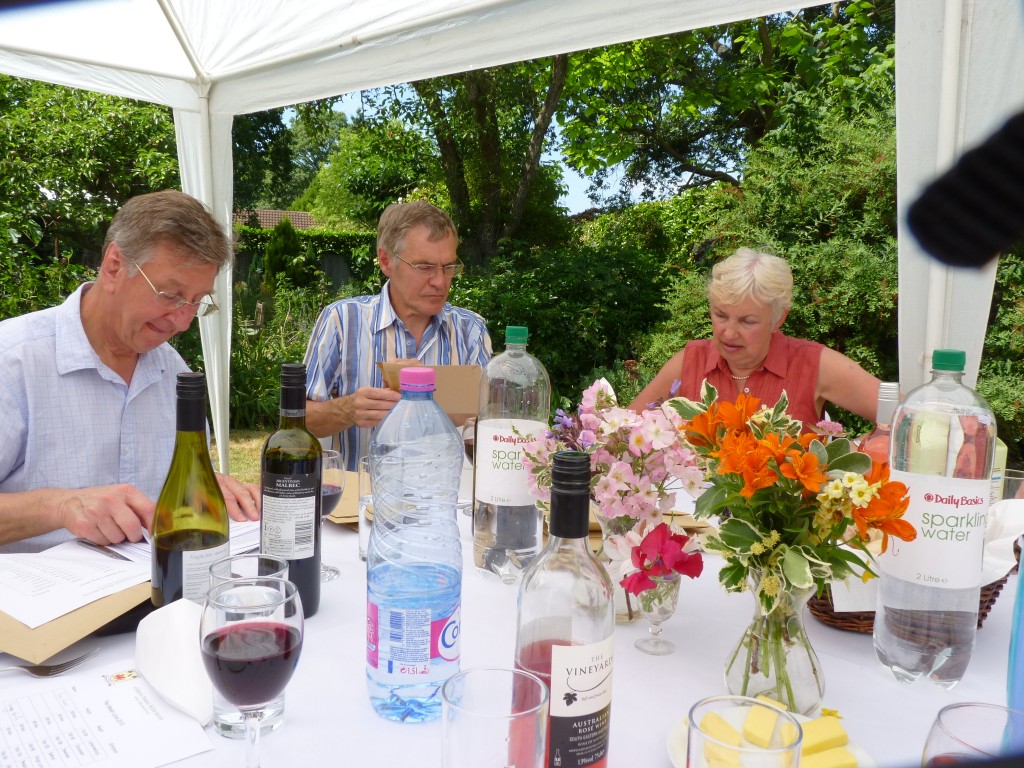 It was a quiz about the Lions – given his birthplace, height and weight, identify the Welsh member of the squad. If you got them right you got points and if you needed clues you lost points. As Gwyndaf explained how the cunning points system worked, over on my right Jonathan Pegler was gaily sauntering through the list and filling in the names all by himself, such that by the time Gwyndaf returned to the table, Jonathan had done all of it by himself! Most of the other tables were too proud to sacrifice points for clues – with dire consequences. When it came to marking, Jonathan had got them all correct whilst the next nearest score was around 60%. So the Quizmaster, exercising the great powers vested upon him, disqualified Jonathan’s table for spurious reasons, and declared the other table winners.

As for me I’d declare the whole thing void since one of the correct answers was Sam Warburton whereas Sam Warburton is in fact Sam Kennedy-Warburton and it’s on such things that reputations are made and lost. Despite rugby fan Margaret Payne’s sterling efforts at her table, there was a heartfelt plea from some of the ladies to have a quiz more suited to their gender. Maybe a lady will set a quiz the next time?
The lunch itself was a selection of quiche and cold meat, salad and delicious summer desserts – ideal for the weather. Colin’s collection of Welsh CD’s played at low volume provided suitably “hiraethog” background music.

After the meal Jonathan expressed our gratitude to Di and Colin for graciously hosting us and presented them with flowers and a bottle of good wine. Gwyn & Jean Owen can hardly wait until it’s their turn next year! 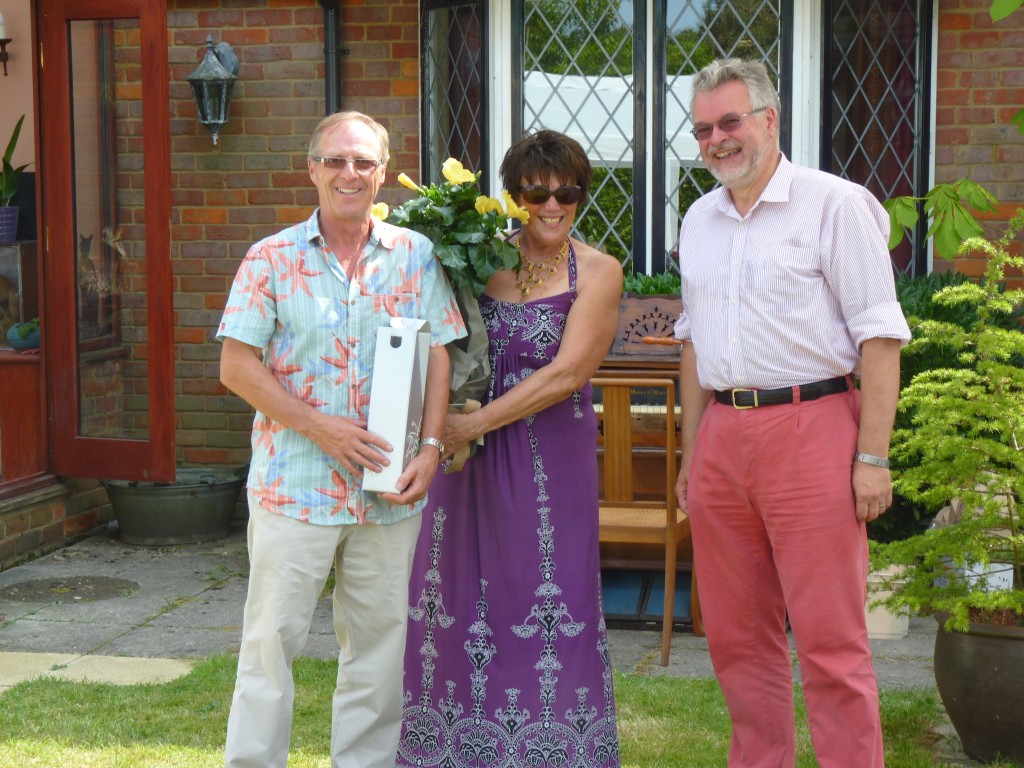 Gwyndaf also had a cricket game lined up in the further part of the Garden but we never got to try that since it was far too hot for such activity and everyone was so engrossed in their conversations, although some had been practising in the morning – did they have an inside edge?
This “wilder” part of the garden had interesting features such as the mirror on the wall as a “through the looking glass”, a ladder up the tree and, an old arch over which draped lovely roses. Colin explained to me that this latter arch (and it was old!) was one of 3 original ones from the Manor House on whose grounds The New House was built.

And as we were winding down, Barrie Reece – with his wife Ann, new members attending their first Society event – decided to have a go on Colin’s organ. 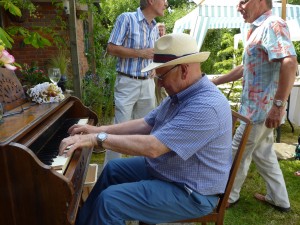 And good he is too! Watch out John Breese and Jonathan Pegler, there’s competition about. 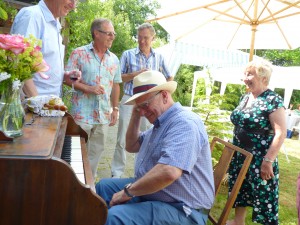 So we had a few songs to finish with. Colin led the singing with laser-like precision on the top notes, whilst Jonathan – recently returned from an operatic course in Italy – provided the harmony. 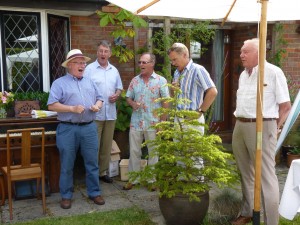 Then those staying behind helped with dismantling the marquees and tables, packing everything and leaving it as we found it, so that Di and Colin could get back to normality quickly. 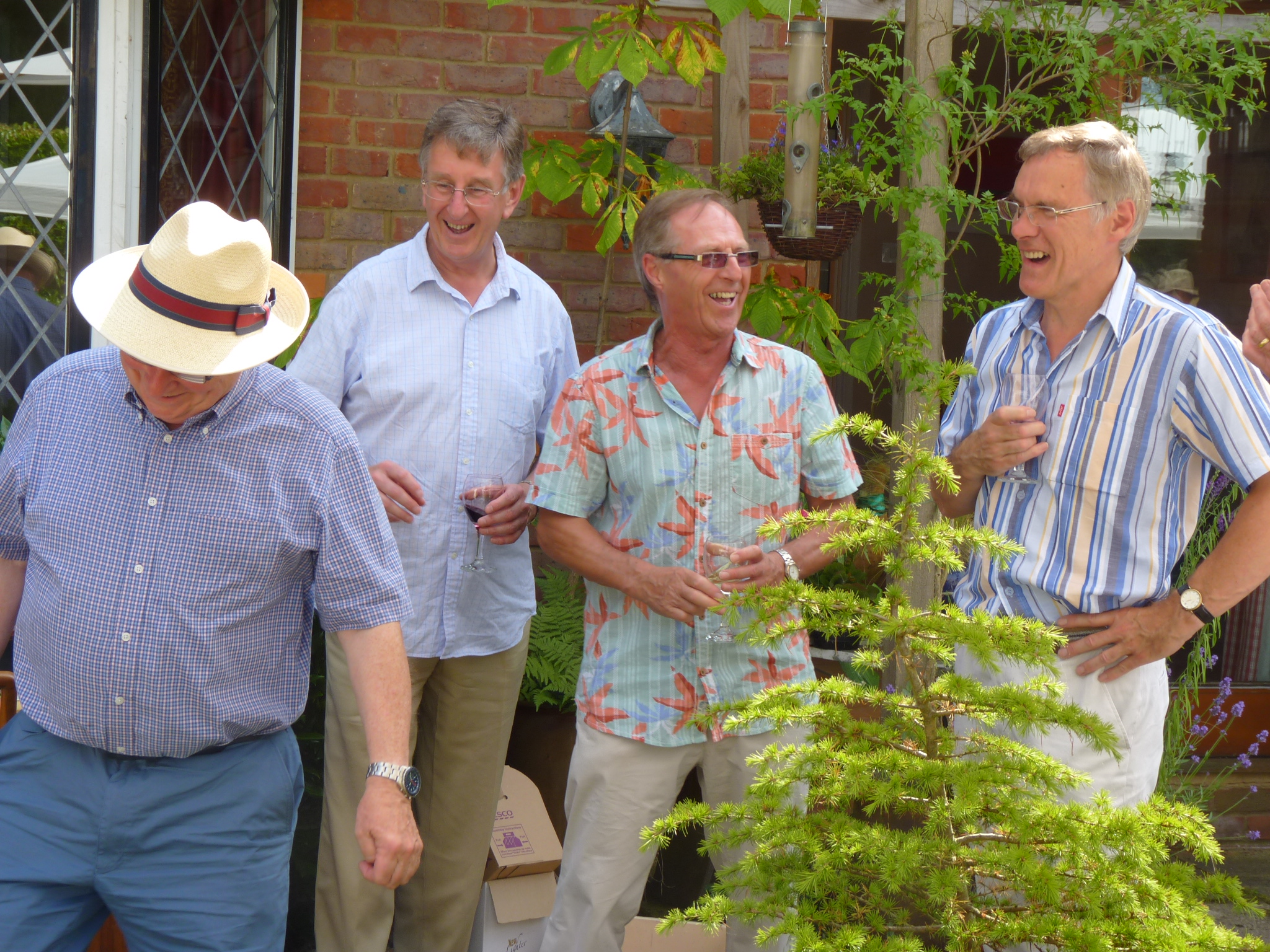 Liz Seely showed us how to fold the cloths and tents to perfection. 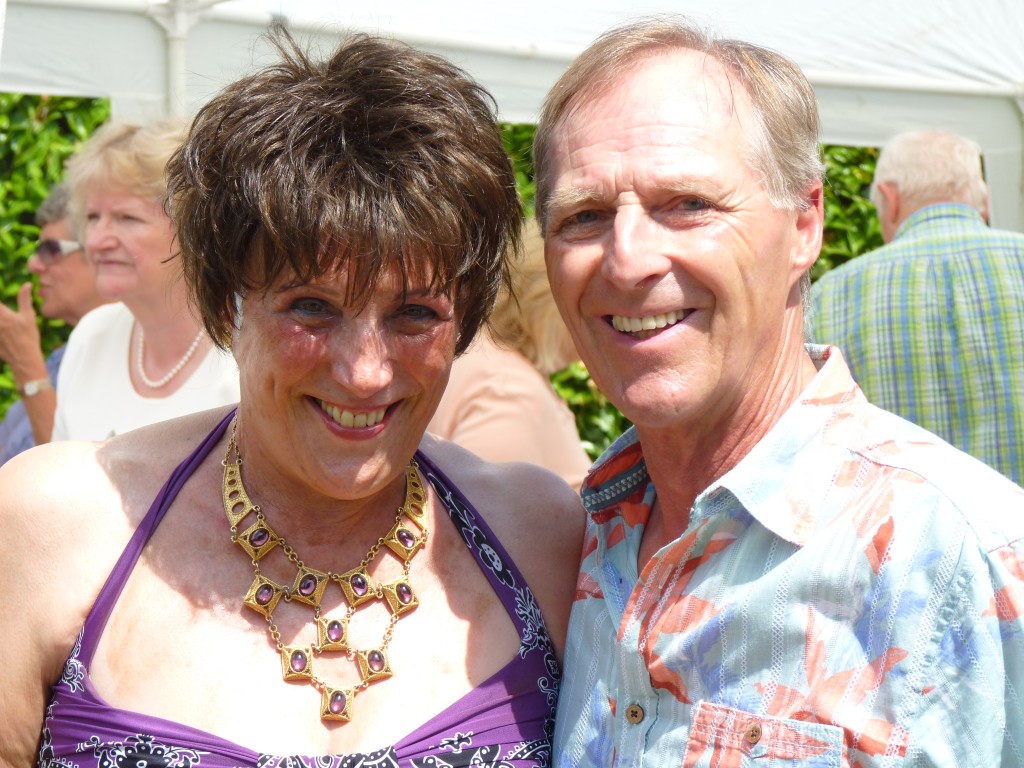 Thank you Di and Colin for hosting us and thanks to all who made the many hands make light work. Diolch o galon i bawb a ddoth i wneud diwrnod atgofiadwy i’r gymdeithas.

Maldwyn gave me a lift back in his gleaming new car, telling me that he’s planning a over 200 mile walk from Swansea to Aberaeron. Maybe that’s what growing up in Soho does for you! A lovely end to a lovely day.

Trip to see the Magic Circle in London
Evening of November 5th – sure to go with a bang!
Booking details and costs to follow