A warm Welsh welcome was provided by Bill and Sue Jones for the Christmas Drinks Party which they hosted at their wonderful home in Camp Rd, Gerrards Cross on Sunday 8th December. 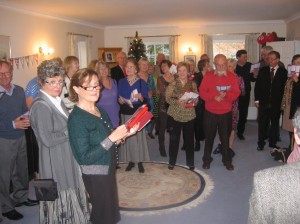 The wine and beer flowed and an excellent turnout of over 50 people enjoyed a fine and plentiful selection of canapés from a new caterer, while they mixed with old friends, met new members and discussed their plans for Xmas and the New Year. 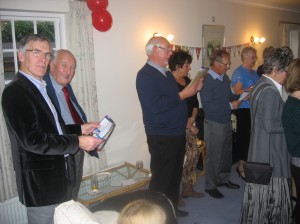 Xmas at the Jones’s

After an hour or so, when the canapés were eventually all consumed and the sound of chatter had begun to subside, it was time for the ever popular carol singing.

Bill Jones warmed up his electric organ with a solo virtuoso performance but it was John Pegler once again who was called on to provide the accompaniment for the carols. 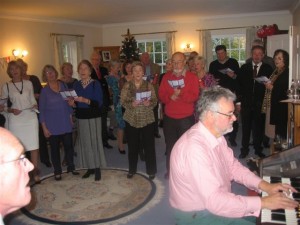 Despite the fact that by then some members had already departed, the thirty or so remaining members joined in the singing of a traditional selection of carols in wonderful Welsh harmony before finishing the proceedings with a gusto performance of Maen hen wlad fy nhadau.

A fitting end to another successful year of events for CDWS.

The Oxfordshire Welsh Society holds an event every month or two with evening recitals and golf days.

There is also The Oxford Welsh Male Voice Choir which gives about 12 performances a year.

George Jenkinson is chairman of the Oxford Welsh Male Voice Choir – a busy choir performing on a regular basis all round Oxfordshire. Below are their 2014 public concerts.

George writes: ” In addition to the website we have a facebook page  https://www.facebook.com/OxfordWelsh which has recent photos and news.
If any of your members do come to any concerts, please stop for a chat, its always good to hear of other Welsh Groups. ”